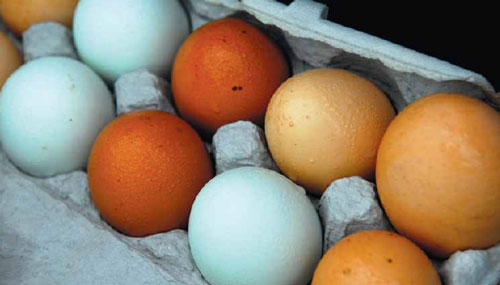 While these phrases are seen wherever eggs are sold, their meanings remain open to interpretation. In 1990, Congress passed the Organic Foods Production Act to regulate and implement universal standards for organic production and labeling. However, descriptors such as “free range” and “cage free” rarely live up to what their meanings imply. Pastured—a term you won’t likely see on a grocery store egg carton—is the key to finding eggs in season from chickens that roam freely.

Yes, Eggs Have a Season

In addition to their foraging instincts chickens are photosensitive, which means they need light to lay. The more light the more eggs. As summer inches minute by minute closer to its solstice and its longest day, chickens produce more and more eggs. Once sunlight tips the scales and starts working toward more darkness than daylight, chickens lay fewer eggs.

“Right now I’m drowning in eggs,” said Lucy Cameron of Thistles & Clover Farm. “I can’t figure out how to get rid of them. It works out topsy-turvy. People start wanting eggs and get used to buying them at the farmers market and by the end of the market there aren’t anymore.”

Market goers who like to sleep in on a Saturday morning can probably buy a dozen eggs at 11am in June, but come September the early bird gets the eggs. Most farmers sell out within the first hour or two.

Preserve , Bake and Peel for Freshness

If you are a seasonal purist then preserving eggs should be at the top of your to-do list. Gallon jars of pickled eggs in dive bars across the country may come to mind, but there is better way to preserve your eggs for later use—freeze them.

Try as you might, you cannot simply crack an egg and put it into the freezer. The white loses all viscosity and the yolk dries out when thawed. It’s inedible. Instead, briefly mix the white and the yolk together with a fork, pour the egg into an ice-cube tray, and pop the tray into the freezer. It works like a charm. Once frozen, transfer the eggs into a freezer-safe bag.

Keep these parameters in mind: two rectangular cubes equal one large egg. Frozen eggs need about 24 hours to thaw in the fridge, and as long as you don’t want a poached or fried egg, then freezing is a good way to keep them.

I set out to test this egg freezing theory by making chocolate chip cookies and scrambled eggs, using previously frozen eggs. The cookies tasted great. They had the same crumb, lift and flavor as those made with fresh eggs. The scrambled eggs faired just as well; they were moist, springy and flavorful.

Pastured local eggs have yolks that tend to be a deep, rich orange color. If you’re baking lighter colored sweets, such as sugar or butter cookies, you might see a yellowish tint in the finished product. The color shift is subtle but it’s something a baking perfectionist would definitely pick up on, so take it into consideration if you’re after a specific hue.

The fresher the egg the more difficult it is to peel. If you are shopping at the farmers market don’t plan on deviling the eggs you bought that morning for your afternoon picnic. You will end up with piles of egg white stuck to egg shell and not a devil in sight.  Once the egg is 10 to 14 days old, the air cell, a little pocket that forms between two membranes in the fat end of the shell, should be large enough that you can whip up a batch of your famous egg salad in no time.

The Price of Eggs

Grocery stores often use eggs as a sale item to get you in the door to buy other products. Eggs and other staples are sold at a financial loss to the store when marketed in the weekly circular to help drive traffic. Those products are referred to in the grocery store industry as loss leaders. Grocery store eggs typically sell for 99 cents to $1.50 per dozen. Stores can deeply discount the price of eggs to entice you to come into their store and spend more on other products. If you purchase free-range eggs you are likely to spend somewhere around $3.50 per dozen. At the farmers market you are likely to pay $4 or $5 per dozen eggs. They will be local, should be pastured, and may or may not be organic. It’s important to ask the farmer questions and ensure you share similar value systems. Why should you pay $5 for a dozen eggs? When broken down the cost per egg is about 40 cents. Considering most people can have two eggs and slice of toast for breakfast and call it good, paying less than $1 for a meal is pretty affordable. The other consideration is nutrition.

A 2007 Mother Earth News study compared the nutritional data of eggs from 14 pastured flocks from around the country with the United States Department of Agriculture nutritional data for conventional eggs. The study revealed that pastured eggs had one-third less cholesterol, one-quarter the saturated fat, two-thirds more vitamin A, twice the omega-3 fatty acids, three times the vitamin E, and seven times more beta-carotene than factory farm eggs. A 2008 analysis found vitamin D levels to be four to six times higher in pastured eggs. More information can be found at MotherEarthNews.com/Real-Food/2007-10-01/Tests-Reveal-Healthier-Eggs.aspx.

The USDA still contends that there is little to no difference between a factory egg and free-range eggs, organic or otherwise. Supporters of local foods often argue that USDA studies reflect sampling of large “free-range” farms, not small pastured flocks.

Often overlooked in stories and reports on food are the civic, social, environmental and animal welfare considerations made by buyers.  Buying local, pastured eggs builds a relationship between you and the farmer, helps support the local economy and reduces your carbon footprint. Although I’ve never heard a chicken talk, I’m sure if they could, they would say life on the range, even with the risk of a hawk or raccoon attack, is much nicer than a life in battery cages.

Summer Miller is an award-winning journalist whose work has appeared in Every Day with Rachel Ray, Eating Well, AAA Living, The Reader and more websites than room to note. She lives with her husband and two children in Elkhorn, Nebraska, where she spends most of her time thinking and writing about food. You can contact her at miller.summer@gmail.com.