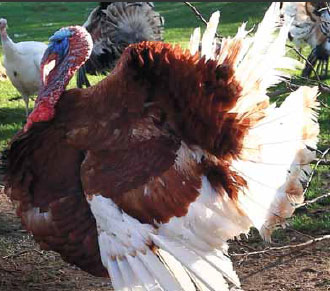 Ask any Californian who has yet to visit or what they picture it to look like, and you may get the generic response: Fields of corn. Local Nebraskans and Iowans can’t blame Californians for this vision. After all, is the , and the infamous movie set in , Field of Dreams, does feature nostalgic baseball players meandering through cornstalks.

For one Californian though, represented an opportunity to support sustainable agriculture by way of raising heritage turkeys.  From to , , Randy Wattermann and his family decided to leave the and its near-perfect weather behind for an acreage of land near relatives and friends.  After reading books by American farmer and author Joel Salatin and attending a pastured poultry seminar sponsored by the Nebraska Sustainable Agriculture Society, Randy was inspired to implement his own sustainable farming practices in 1998.

Randy, who raises a few hundred heritage turkeys, said that the heritage breeds are making a rapid comeback, especially among local farmers for many reasons. These reasons include its rich flavor and plumage, more proportionate ratio of breasts to legs, better balance between dark and white meat and its superior biological diversity.

“When a particular crop or livestock species is cloned or bred within a narrow genetic pool, the risk is much greater that a particular bug or other stress comes along and wipes out a wide swath of that particular species or variety. Should the population of heritage turkeys fade out, leaving only the commercial whites, there would no longer be a naturally sustainable strain of domestic turkeys,” said Randy.

According to the Heritage Turkey Foundation, this particular breed of turkey is the ancestor of the common broad-breasted white industrial breed that you find at your local grocer. Each year the Wattermann Family Farm locally hatches and raises its own variation of heritage turkeys, which include Bourbon Red, Sweetgrass and Heritage White varieties.

“Heritage turkeys are old-fashioned turkeys raised on a farm. They can reproduce naturally, but don’t grow as fast or as big as the commercial types,” said Randy.

The domesticated commercial white breeds are unable to accomplish their own reproduction because of their enormous size and therefore have to be artificially inseminated.

On the Wattermann Family Farm, the heritage turkeys are truly free-range, roaming the pasture at will and eating grass, clover and grasshoppers. Randy also mixes his own fresh feed using organic and transitional non-GMO corn, soy meal and oats.

Randy has a legion of fans who appreciate a more authentic, sustainable Thanksgiving feast. Laurie Barger Sutter of Lincoln is one such fan. She discovered the farm years ago through the Nebraska Food Cooperative. “I discovered the co-op several years ago through a news article and joined as a consumer to increase my access to and ability to support locally grown and sustainably and humanely raised food products,” said Laurie.

Laurie and her husband made a commitment about five years ago to change their food-purchasing habits and purchase only freerange and grass-fed meat and eggs, as well as locally and organically grown produce and food products. For the first year, the Sutter family decided to order a free-range turkey from a national organic food store because they couldn’t find one locally. “It came from , which didn’t exactly meet our local food criteria. It was not a heritage turkey, and it did not taste significantly different from the mass-produced turkeys we had purchased previously.”

When the Sutter’s learned of the Wattermann Family Farm offering turkeys for sale through the food co-op, they were elated. “We’ve been grateful and loyal customers ever since,” said Laurie. “The products Randy Wattermann and his family produce have become a staple in our family’s diet.”

Laurie orders several turkeys, as well as her Thanksgiving bird, in early autumn. Randy begins taking orders as early as the summer since he has a limited supply. Because heritage turkeys are in demand thanks to their lack of volume, they don’t come cheap.  Prices range from $3.50 per pound to $7.50 per pound; the average price through the Nebraska Food Co-op is $3.75 per pound.

According to Laurie, the flavor of a heritage turkey is really incomparable to a mass-produced bird because it possesses a deep, rich, complex taste. Laurie claims that the meat also tends to be leaner, somewhat darker and more densely textured, with the bird being more proportional in size. Laurie would never consider buying a commercialized turkey from the grocery store again. Her family agrees that there is something special about having a heritage turkey at Thanksgiving. “My daughter’s boyfriend, an executive sous chef at one of the best restaurants in the city, joined us for Thanksgiving dinner last year. I knew that the last thing he probably wanted to see or eat at our dinner was more turkey, but he gamely put a small piece on his plate to be polite. When he ate it, however, his eyes widened and he immediately reached for more exclaiming, ‘Wow! That’s phenomenal! The real deal!’ And it was,” said Laurie.

To Order a heritage turkey

Theresa Farrage is a freelance writer whose work has appeared in Midwest Living and the World-Herald. Her passions, outside fashion and philanthropy, include supporting local restaurants and food producers. She also loves expanding her palate by attempting to cook and eat various ethnic cuisines.