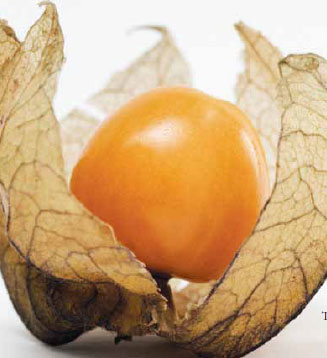 A Misunderstood Neighbor
The Ground Cherry
By Liz Granger

If a weed is a plant out of place, Physalis specializes in making new homes for itself, wanted or unwanted. Older Nebraskans recall ripping the vines from their fields, where they choked the soybeans or fouled the combine head or from gardens where they strangled the day lilies. These veiny husked globes spelled trouble.

Physalis suffers the ill repute of a vagabond, as the plant can flourish practically anywhere. Go north toCanada, south toSouth Africaor east toAustralia. Across the globe, behold: Physalis. In all of the counties ofNebraska, behold.

In University of Nebraska-Lincoln textbooks, readers find Physalis. Two species weaseled themselves into the Weeds of theGreat Plains, which is an authority on the notably adaptable. According to The Flora of Nebraska, hederifolia, heterophylla, hisipida, longifolia, missouriensis, pumila and virginiana all grow here.

If my litany suggests a pest, I urge you to peel back the papery husk of an edible variety like longifolia or pruinosa. Bite into this golden relative of the tomatillo, this berry thing, and taste its jammy insides—the nutty watermelon, the mellow sugar, the dulcet vinegar finish. The Boiler Room’s Chef Paul Kulik describes the fruit’s “vegetal sweetness and overlaying gooseberry-like acidity.” I urge you to taste a ground cherry, slowly, and remember those flavors the next time that somebody calls this plant a weed.

Ground cherry: enter the cloak that this fruit will likely wear to your next gathering. You two may mingle over savory charcuterie at the Grey Plume, where Chef Clayton Chapman pickles them in George Paul Vinegar Lacrosse Balsamic. At the Boiler Room, Chef Kulik may roast them alongside tarragon and pine nuts, finishing them with a sweep of saba.

In O Pioneers!, Willa Cather’s Mrs. Bergson “made a yellow jam of the insipid ground cherries that grew on the prairie, flavoring it with lemon peel.” My jam isn’t your jam, and perhaps Mrs. Bergson found ground cherries “insipid” because she pined for the cultivated stone fruits of some longitude back east.

“If you think about the early settlers, fruits like apples, pears and cherries weren’t readily producing right away,” said Kathleen Cue, horticulture associate at the University of Nebraska-Lincoln Extension Office. “With many plants, you have at least five years invested before they’re producing fruit.” In one season, ground cherries morph from seed to food—too easy, perhaps, for Mrs.  Bergson to esteem.

This ease renders ground cherries perfect for home gardens. Treat them like a tomato plant, and start the seeds indoors about six weeks before the last frost. Then transition them outside to full sun.

Certain care websites call for moist or dry soil, full sun or mottled shade, but remember, Physalis isn’t finicky. Ground cherries grow annually inNebraska, though they do reseed themselves. Next year, gardeners may find some unexpected Physalis sprouting up around their yards.

Most varieties are known for their sweet, calyx-encased fruits and spreading vines, though the edibility of some plant varieties is debatable. Ground cherries are nightshades like bell peppers, tomatoes, potatoes and eggplant. The unripe fruits of the well-known, orange-husked Chinese Lantern plant are reportedly poisonous when eaten in quantity. Sources concur that the leaves, stems and husks of Physalis should not be eaten because of the presence of solanine, a poison found in some nightshade species.

Bryan Kliewer of Squeaky Green Organics loves to use ground cherries in his edible landscaping. The fruits are easy to collect because they fall toward earth when they’re ripe. All people need to do is “sweep their arms underneath the plant to harvest,”Bryansaid. No need for machines, thoughBryandoes suggest rain gear. Rain can degrade the husks of fallen ground cherries, so “in a perfect world, you put a little umbrella over each one,”Bryanchuckled. Although ground cherries last for many weeks in their natural wrappers, if the fruits get wet, gardeners should be sure to unhusk them before storing their bounty in the fridge.

Squeaky Green Organics is selling ground cherries at its farmers market booth this year, as is Rhizosphere Farm. Beth Matson at Honey Creek Farm sells to Wohlner’s Grocery and at the farm’s new website, NeverEndingHarvest.com. The staff at Shadow Brook Farm reports that they grew ground cherries a year or two ago but never brought the plant for public sale because there wasn’t much interest from the public. Carl Glanzman of Nishnabotna Naturals says that he has never grown ground cherries, but that he was asked to for the first time last year. None of the greenhouses that I spoke to—including Mulhall’s—offer seeds or starts at this time.

Interested gardeners can reach out to Seed Savers Exchange, a nonprofit that dedicates itself to the preservation and sharing of heirloom seeds. Last year, Seed Savers Exchange introduced Aunt Molly’s—Physalis pruinosa—a ground cherry variety in its catalog.

There are simple things you can do with ground cherries: saute in butter with garlic and basil to accompany poultry; dip into chocolate fondue; chop into salsa; or include in fruit salads, breads or muffins.

Liz Granger is a Chicago-based freelancer who swears that ground cherries followed her from Nebraska to Québec to Uganda.