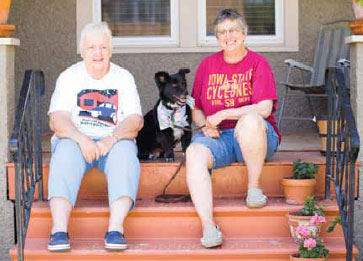 “The Kingdom of Heaven is like a grain of mustard seed, which a man took and sowed in his field, which indeed is the least of all seeds; but when it is grown it is the greatest among herbs and becometh a tree, so that the birds of the air come and lodge in the branches thereof.”

A large unassuming glass jar rested on the kitchen counter behind Beth Richards as she poured a cup of freshly brewed coffee. Easily 12 inches high and the width of a woman’s hand, the jar held captive umber mustard seeds beneath its indigo screwtop lid.

Beth opened the refrigerator and smelled the milk before announcing, “It’s OK,” with a chuckle and poured it into the mug. By way of her job as the mail carrier in the Minne Lusa neighborhood just south of for 15 of the last 30 years, she became friends with lifelong resident Sharon Olson. It was a love of place and a desire to connect that brought them together to create the Minne Lusa House, where people put up summer’s bounty and connect with one another in the process.

The two retirees bought the now silt-colored stucco house at in 2009 with the intention of preserving their neighborhood through food preservation. They wanted a place where people could come together, be comfortable and get to know one another.

“The house was only $20,000. It had been repossessed. We thought, we could each put in $20,000 and that would be enough,” said looking to the side and shaking her head in a way that seemed to say that they were crazy to think such a thing. “It wasn’t enough.”

After their initial and several additional investments, the house was converted from a shabby, neglected relic to a proud, glistening gathering place.

Those who want to learn how to can from Beth and Sharon should expect to be treated like long-lost friends and close neighbors—welcomed, put to work and sent off with food in hand. There isn’t a schedule of classes, rather they are announced from time to time on the Minne Lusa House Facebook page. Would-be canners don’t need to wait for a class but are encouraged to call the house and set up a time. If you have produce to can, then bring it with you.  If not, Beth and Sharon will probably have something from their own garden to share. Groups are limited to four and require a $10 donation per person to cover costs. Sharon and Beth provide the jars and knowledge; you get to leave with freshly canned food and fond memories.

Jars of chopped carrots, potatoes and plum sauce sitting comfortably in long rows atop the shelves of a metal baker’s rack in the back bedroom and hidden behind the glass doors of built-in bookcases serve as examples of what was done in years past. There is also a canning record book where Beth documents everything from doomsday predictions to the very first canning effort at Minne Lusa House. “I have it all written down,” said Beth getting up from the table to find the book and jog her memory. “Yes, you do. It’s a bible,” said Sharon, who in a lower voice tucked her hand alongside her mouth and mentioned, “She’s the organized one.”

Beth laughed as she returned with the book. She sat at the dining room table and opened it to the exact entry on May 16, 2011, when the Minne Lusa House put up its first jars—six, eight-ounce jars of Guinness mustard. The recipe was given to her by a neighbor and in many ways, represents the overall impression of the house—little is better than a good beer and spicy friendships.

The entry below it reads, May 21—THE END OF THE WORLD, mocking the media-hyped prophesy by Harold Camping that came and went. “I just thought it was worth mentioning,” Beth said smiling.

Although jokes and laughter are bound to welcome any canner, both women take their efforts at the Minne Lusa House seriously.  They each have reasons for spending their retirement years hosting Saturday-morning coffees for neighbors and canning classes for anyone who’s interested.

Beth hopes to regain the beauty of smalltown life she remembers as a child, and wants to revitalize the neighborhood she loved while growing up. They aren’t hosting giant fund-raising campaigns, nor are they even interested in becoming a nonprofit. For them, it is simply about two women being neighborly and using their talents to benefit the greater good.

Like the mustard seed, grand things often come from small beginnings. As said, “It’s a start.”

Summer Miller is an award-winning journalist whose work has appeared in Every Day with Rachel Ray, Eating Well, AAA Living, The Reader and more websites than room to note. She lives with her husband and two children in , where she spends most of her time thinking and writing about food. You can contact her at miller. summer@gmail.com.