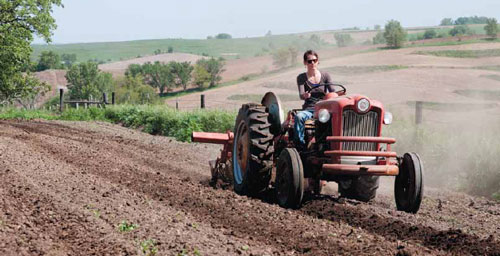 So many moments in life teeter on the outcome of a game of tug of war. Which moment, opportunity or experience is explored depends entirely on whom, or in this case, what, has a stronger pull.

For Danelle Myer, returning to , and the land her father farms was inevitable. It is her life’s work, and everything that came before simply led her to this point. Doing it nearly a decade after her divorce and giving up a career, financial stability, health insurance, a home in Benson and an urban lifestyle to start One Farm required a leap of faith and a whole lot of courage.

Sitting at a grey, iron table in the backyard of the Benson bungalow she now rents out, Danelle absent mindedly picks up segments of her long brown hair and twists them between her index finger and thumb.

“This house,” she said, releasing her hair, tapping her hands on the table and smiling, “this is my, ‘I am woman hear me roar house.’ I had been divorced for a few years and I knew as soon as we sold our house, I wanted another one. This is where I learned how to be a gardener. This is where I started to take out grass and put in plants.  In many ways, this house reflects who I have become.”

The journey from a Benson urban-dweller to a , farmer was a slow, introspective process. During a self-described pity party at age 37, it occurred to Danelle that being single and childless provided freedom that meant she could have any kind of life she wanted—including the life of a tractor-driving, country marketselling organic farmer.

The first glimpse of how this new life might come to fruition came to her while planning a vacation to , where she stumbled across a six-month apprenticeship in agroecology at the of at within its Center for Agroecology and Sustainable Food Systems (CASFS).

The CASFS is one of the most well-respected programs in the . From the earliest stages of development in the late ‘60s, those who guided the program looked at ways to research, develop and promote agricultural practices that were “environmentally sensible, economically feasible and socially responsible.” This multipronged approach considers not just growing food, but the toll growing food can have on the well-being of people and the environment.

She applied for the UC Santa Cruz program in October 2009, figuring it would give her enough time to save money, rent her bungalow and transition from her desk job as the director of marketing for to whatever was next. As crisp fall days shifted to cold winter months, Danelle finally learned her fate in January 2010. She was not admitted. Considering how destined it all felt, being denied was disappointing but not devastating. She was still committed to becoming an organic farmer; she just had to take another route. At least that’s what she thought.

That night Danelle’s parents drove to to sit in the very Benson backyard where I was interviewing her. Looking out over her garden, they discussed what this opportunity might mean and how it might change the course of her life.

“My dad, the conventional corn and soybean farmer, said, ‘This is your one chance. You have to do this.’ So in three weeks I packed up this house and stored everything in the basement, found a renter, went to the doctor for everything I could think of because I was going off of health insurance, and loaded up my two-door Honda Civic with everything I thought I would need for six months and drove west.”

“I remember pulling into the farm in scared to death,” she said, twisting her hair and looking back at the dead spot in the yard that was once her garden and remains her turning point. “I felt like the biggest geek in junior high. I was just this backyard gardener who didn’t know what she was doing. All of these other people had already been doing sustainable ag work, farming, social activism and I was like, ‘Hi, I’m an farm girl and want to be an organic gardener.’”

Feeling awkward at the outset quickly transformed into a deeper confidence about her purpose. Never mind that she didn’t have health insurance or even a job to return to, she was going to farm and she was moving back to her hometown to do it. With each new lesson on cover crops, crop rotation and compost, Danelle’s knowledge on the science of agriculture grew, rooting her belief of its value to her community completely.  During the program, Danelle developed marketing plans, had business meetings with her parents and wrote in her journal about what the whole process meant to her. So much of what she is doing today has to do with her family’s land. She could’ve continued her life in Benson and rented the farmland, but instead she returned home.

“I’m part of something that I was born into,” she said. “How lucky is that?” Danelle is not alone in her desire to farm. According to the most recent agriculture census data, just over 30%—more than 1 million— farm operators are women. This represents a 19% increase from 2002 numbers.

Also according to the census, while men dominate cattle, grain, commodity crops and overall farm size, women-operated farms dominate in vegetable, fruit, nut, poultry, egg, sheep, goat and general horticulture production.  Still, and are in the bottom four states for female-operated farms. While Danelle is happy to be an addition to the number of female farmers, her real intention is to feed her community healthy, local and sustainably grown food. She started One Farm on about four acres of land her father had set aside for her.

Although she and her father farm differently—he conventionally, she sustainably—she said they don’t argue about food philosophies or who drives the moral high ground in the farming world.

“The truth is I wouldn’t be doing what I am doing if my family hadn’t been doing what they’ve been doing,” she said. “So I can’t be critical of the past. I just have to focus on my future and doing things in a way I believe in doing them. We all have the same intention. We all want to grow food. My dad feels like he is feeding the world. I feel like I am feeding my corner of the world. If I’m critical of anything I’m critical of the system,” she said.

During her time at UC Santa Cruz, a friend contacted her about a possible job. It was part-time, food-related and flexible. It met all of her requirements. Before leaving , her role as the marketing director for the for Nutrition in was set in stone, and she had a small income to underwrite her farming business.

After staying in state parks on her return trip to the , she moved into her parents’ basement, where she turned 40 and experienced her first year of farming. When she started, she didn’t even know if her community wanted locally grown, chemical-free produce.

“The first couple of months I was home, I kept hearing the same thing, ‘That’s a lot of work.’ And I would say, ‘Yeah, it is,” she recalled, pausing to reflect, “but there’s something to be said for having roots. I’m a fifth-generation farmer.”

Perhaps those roots are why she is selling more than she expected even this early in the year. People are finding her and thanking her for growing food for them in this way.

She would never deny that the past two years have been the most difficult in her life, both mentally and physically. She has used her body in ways she had never used it before, trusted her gut in ways that required tremendous faith and set out on her own to learn something from scratch. Even still, she never once felt like she shouldn’t be toiling in the soil by day and selling the fruits of her labor during quiet evening hours at the local farmers market.

“Planting peppers last May, I was on my knees facing west in the morning. I looked out over the valley and it was all rolling hills,” she shared. “I literally thought, ‘Oh, my God I’m doing it. I’m a farmer’ and I got a little teary.”

Summer Miller is an award-winning journalist whose work has appeared in Every Day with Rachel Ray, Eating Well, AAA Living, The Reader and more websites than room to note. She lives with her husband and two children in , where she spends most of her time thinking and writing about food. You can contact her at miller.summer@gmail.com.